Another one for the road. Enjoy! 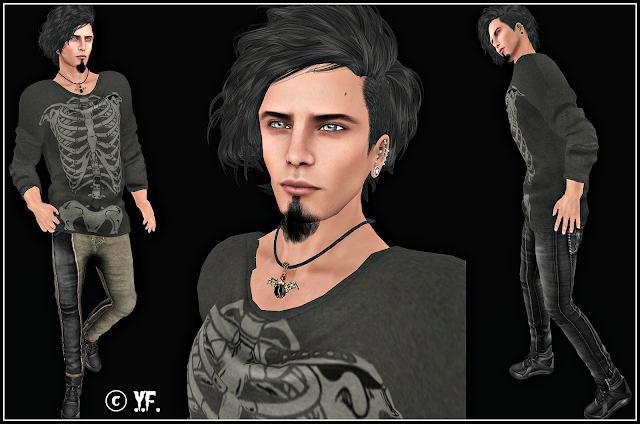 Remember, zombies have feelings, too. Have fun! 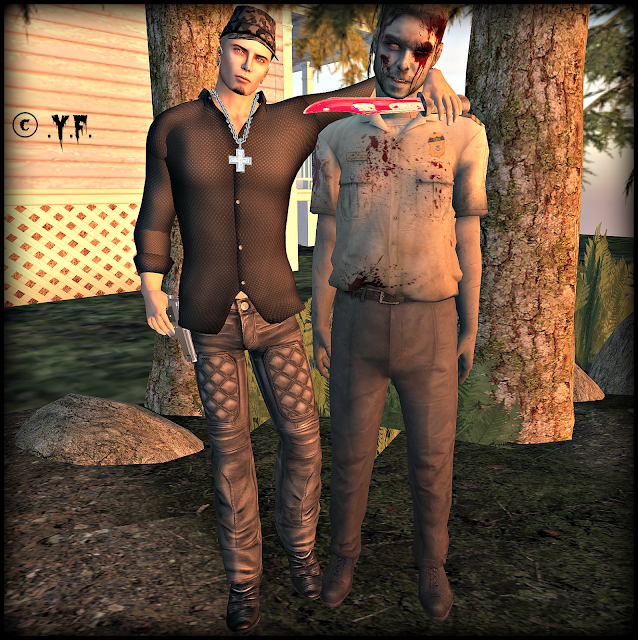 I was a bit sceptical whether I actually needed mesh ears but the ones from [:S&V:] really offer a lot of options (3 styles, pierced and non-pierced versions available), can be colour-fitted with RGB numbers and come with easy to handle add-on earplugs. You can get them at The Body Modification EXPO which still runs for a few more days! 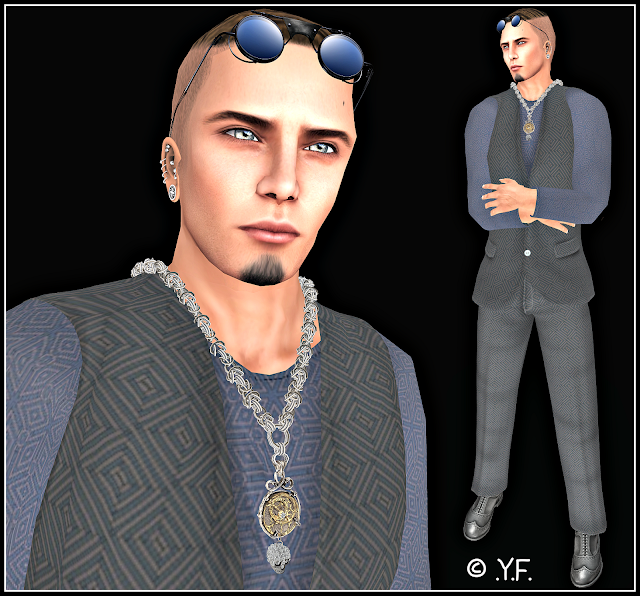 Lapointe&Bastchild (short: L&B) have released another one of their great tuxedo sets.

Use the HUD which comes with the package to either pick one of the 4 predefined looks or make your own. Choose from the  ...
-  4 jacket styles,
-  4 shirt colours,
-  4 pants designs,
-  4 vest colours,
-  4 tie designs and
-  4 pocket handkerchief styles
that are available to create a new look for each night out. 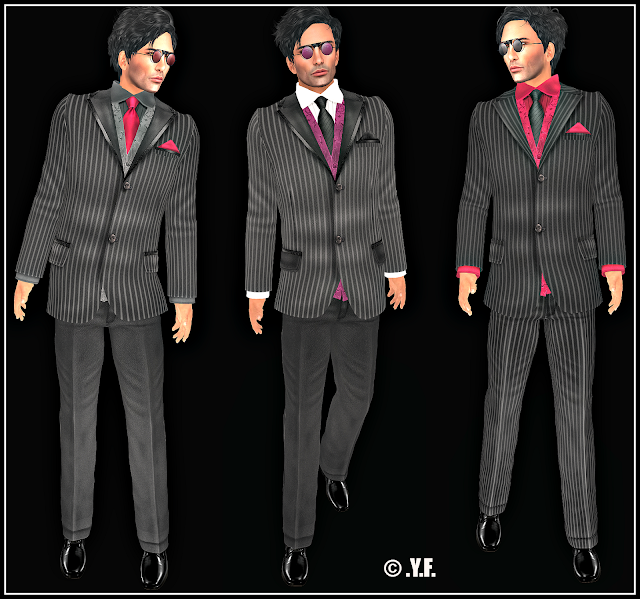 Labyrinth has released a series of six Mesh Heads for guys. I am showing you two of them.

Each of the heads offers a clean, a light stubbled and a heavy stubbled look as well as seven more beard options in four different colours (black, blonde, brown & red) controlled via HUD.

Also included are a bald head and four hair/eyebrow combinations in the aforementioned colours. Furthermore you can decide whether to wear an eyeliner or not. Did I mention you can choose between six different skin tones?

The apparel is new, too! A stylish hoodie just released by *chronokit* and new slacks with belt from kal rau. Enjoy! 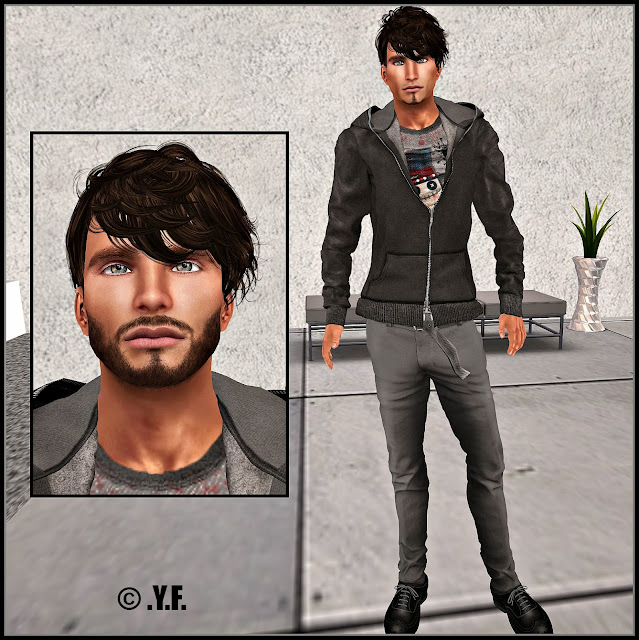 Almost All For Free

Flexing his (few) muscles, Boozoo the Clown was desperately trying to impress Esmaralda the elephant girl. 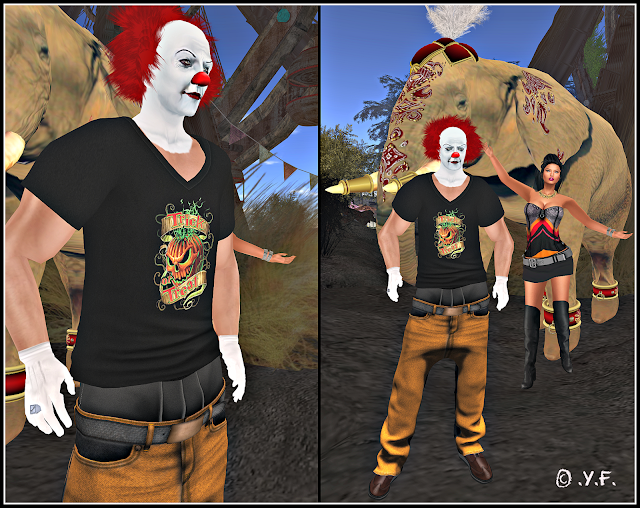 For Esmaralda's Outfit click here!
Posted by Yves Firlan at 11:17 PM No comments: 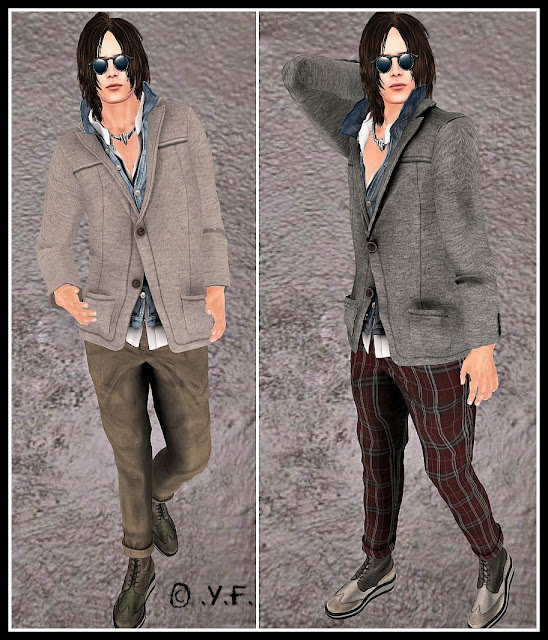 Visiting the loved ones at home and saying hello to Aunt Mary and Uncle Bob who live six feet under. 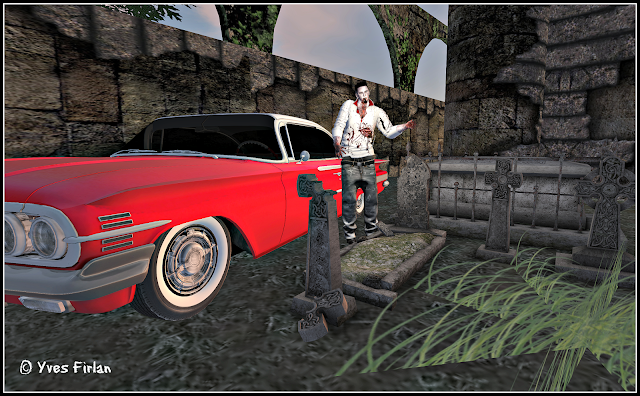 As nice as it must be to have your food crawling all over you I sure don't get it that they won't even come out of their wet holes for the holiday to spend some time with me inside in front of this cozy fireplace. 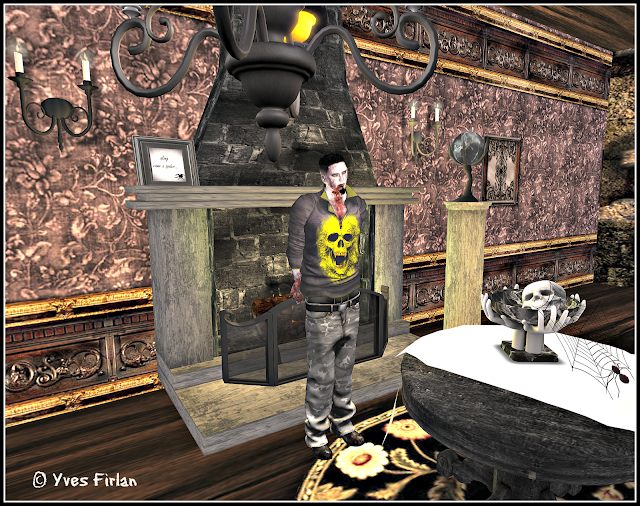 They have such a nice living room after all. 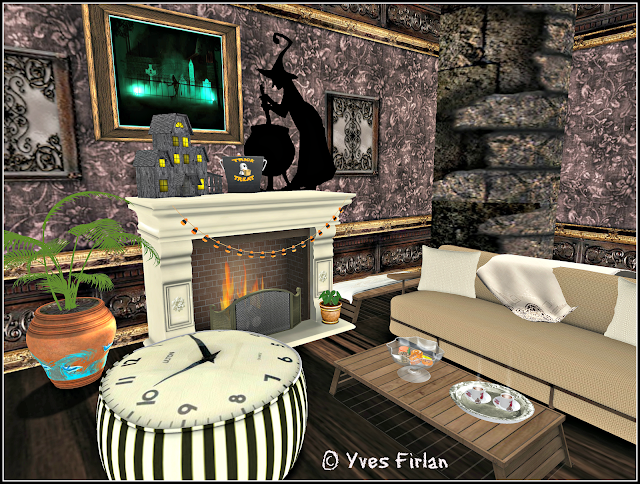 The next morning I felt like I had woken up from a nightmare. It was a nice sunny October day, so ... 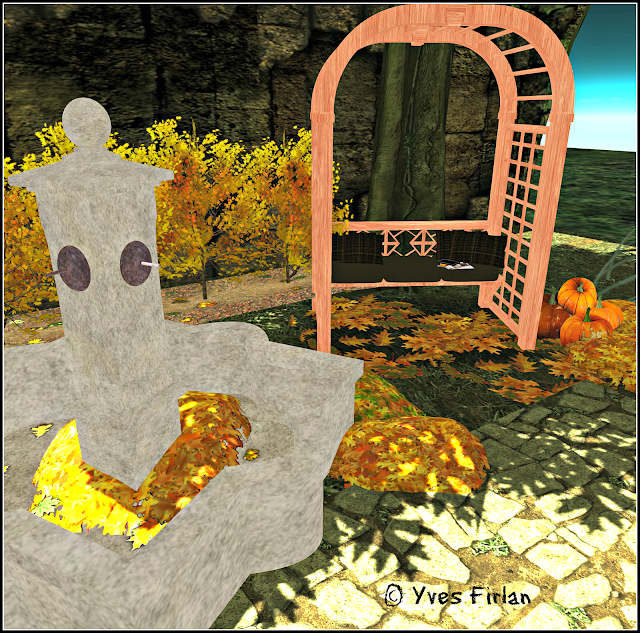 I decided to taking another trip to the museum of screams and horrors which had apparently made me dream that I had turned into a zombie, lol. 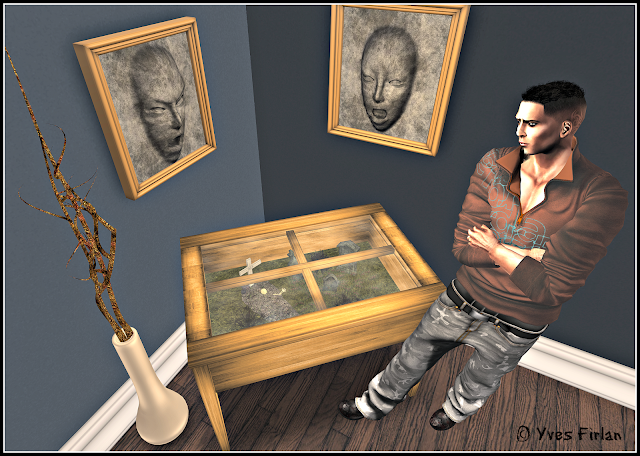 Dura offers a new hairstyle which fits perfectly with the relaxed slacker, “get out of bed at lunchtime”-look I was aiming for.

The swaggy pants come courtesy of ::LikeA:: which released three more series of very low-rise baggy jeans. Each of these pants come with colour-changeable boxers and belt. Today, I show you one example from Set 2 which comes with embellishments.

Last but not least, the cool t-shirt is the first original design made by sf design. It includes a colour-change HUD. Be sure to get it there because it won't be available anywhere else! 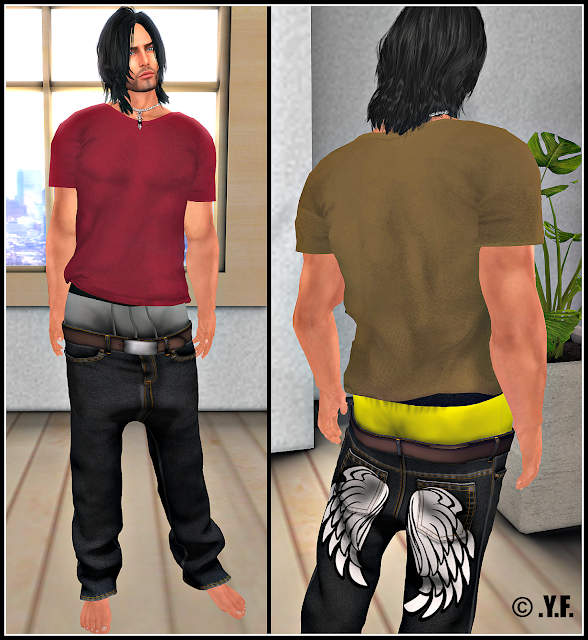 Today a stylish and rarely seen combination of shorts and leg warmers together with a sweater vest/shirt/tie ensemble as well as sunglasses, all from Legal Insanity! The cool skin is an exclusive item from . : VyC : . that you can get, just like the glasses, @ The Body Modification EXPO! 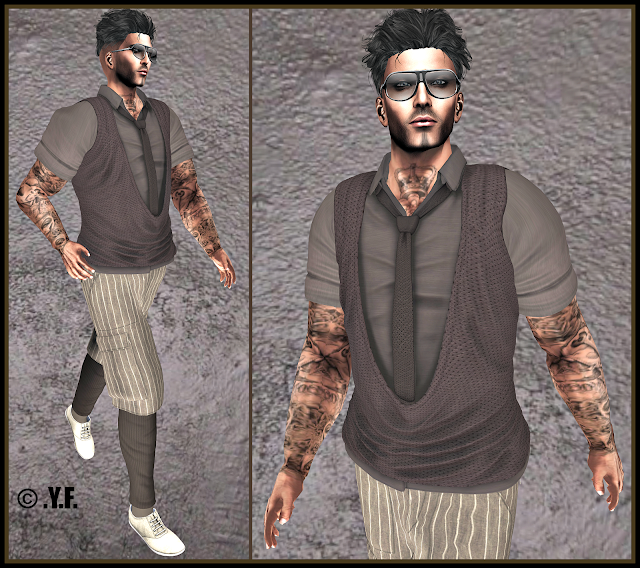 Being a zombie is no excuse to stumble along in worn-out rags: The posh undead wear a stylishly torn suit and blood-covered brogues from Kauna. 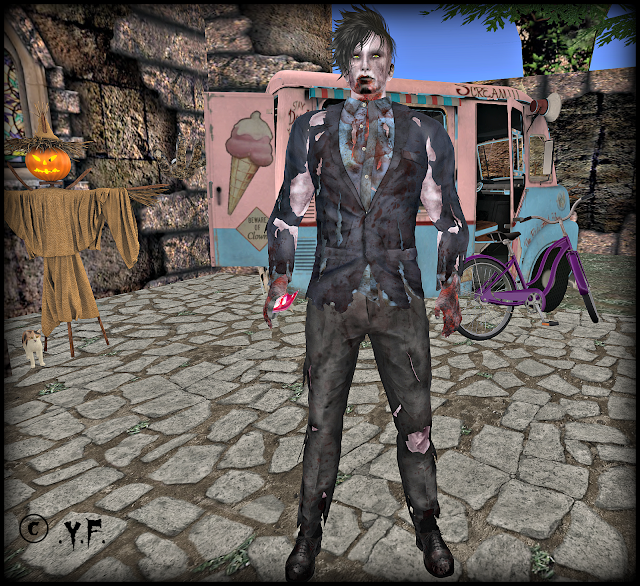 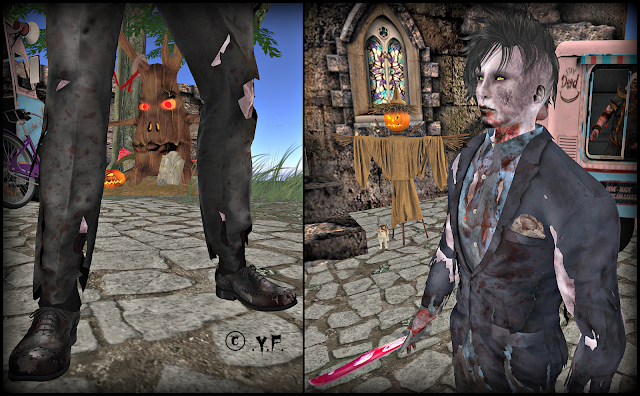 [ hoorenbeek ] has been ramping up their production of new materials viewer ready clothes. Here's a look at some of their latest releases! As always, you'll get multiple wear options. Sweaters and sweatshirts can be worn alone or under a jacket, jackets come in a closed and in an open version. 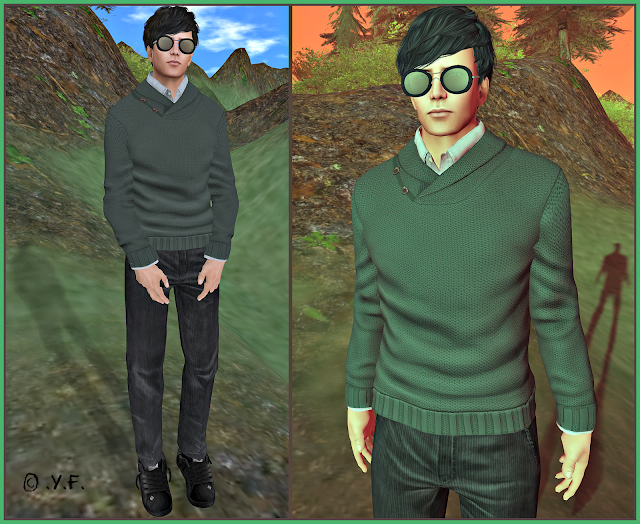 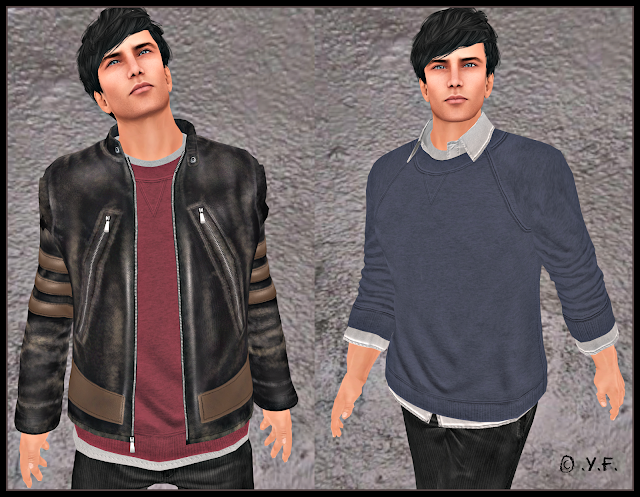 Today, 4 great new releases. Be sure to check them out! Have a nice weekend, guys! 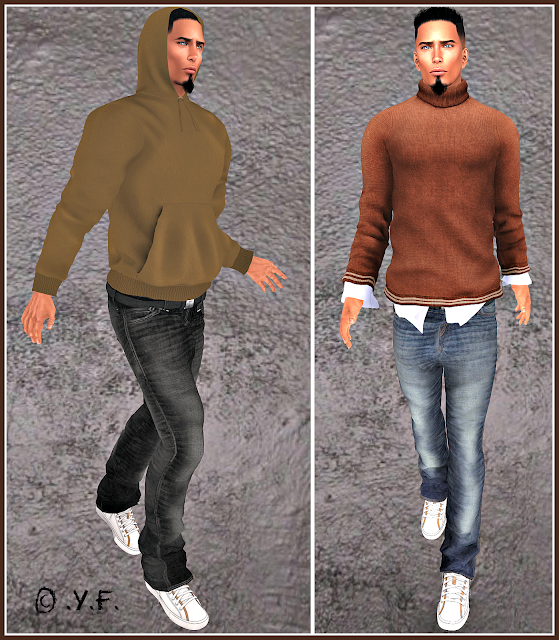 Continuing my coverage of The Body Modification EXPO and showing you some other items which made it into my inventory lately. 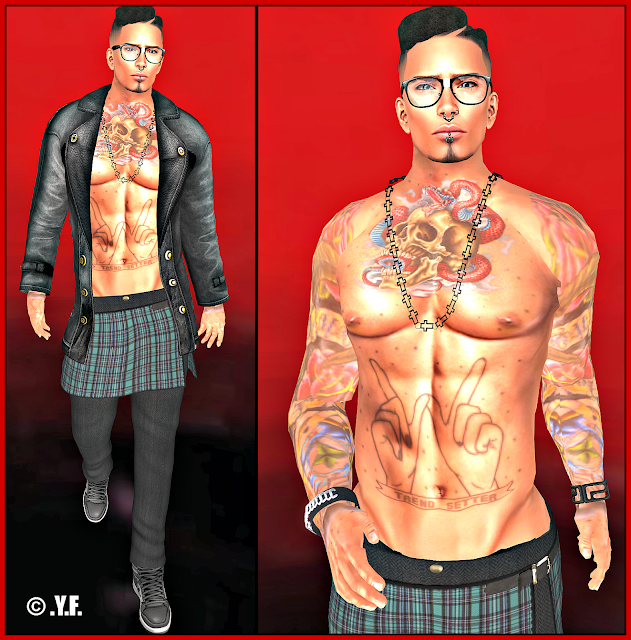 Here's more from The Body Modification EXPO and some other new items like the nice skin from Mr.Bloch and the cool liquid mesh jacket from *chronokit* you can buy in multiple colours/designs. Enjoy! 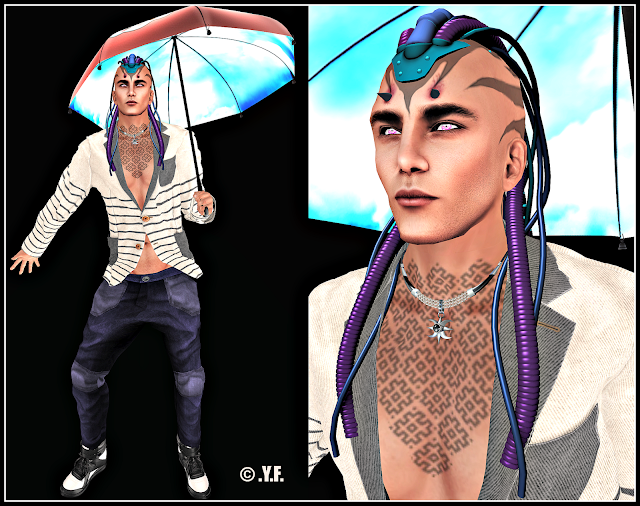 Showing you some of the items I got @ the Men Only Gacha Event and @ The Body Modification EXPO plus a new skin from Labyrinth, a new necklace from Feel and some more stuff. Enjoy! 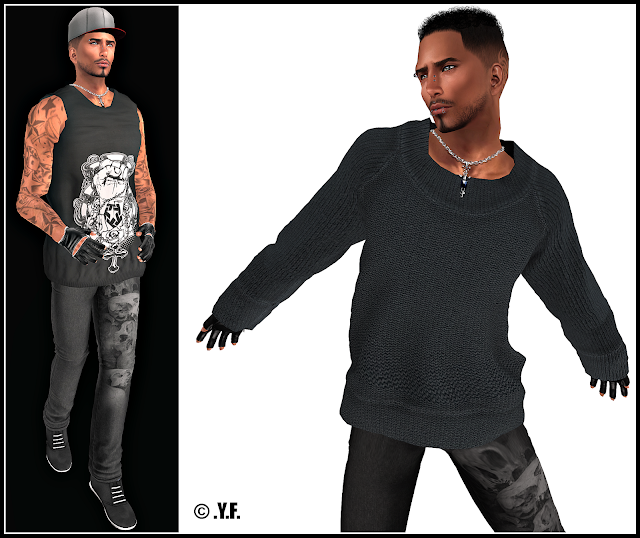 Look Of The Day

Today I built my outfit starting at the top with the new tattoo hairbase from Unorthodox and the new hat from JfL and the rest just unraveled from there. 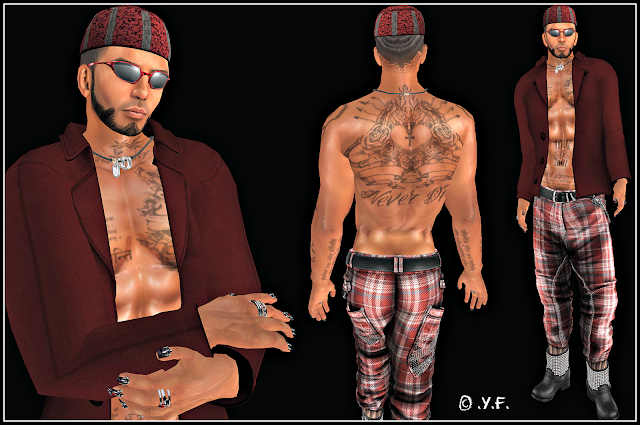